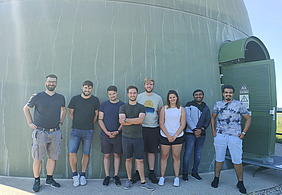 Combining theory with practice, gaining impressions on site and making contacts was the goal of the students from the Renewable Energies department at the Faculty of Mechanical Engineering during their excursion to the wind farm and the large-scale PV plant.

The students visited together the wind farm in Rennertshofen, which is managed by Bavaria Windpark GmbH & Co. KG. Here they got an insight into the wind turbine and the electrical system in the tower. The detailed planning, construction and operation of the plant also played a role. The plant runs economically, which is no problem in Bavaria.

Afterwards, the nearby large-scale PV plant, also operated by Bavaria Windpark GmbH & Co. KG, was visited. It was particularly interesting here that sheep graze on the site and thus the natural lawnmower is always on the move.

The aim of the excursion was for the students to gain an insight into project planning. That means concretely: what to pay attention to during the planning, which legal details have to be considered and what are difficulties, chances and also economic questions that have to be clarified and taken into account.

Many different topics were addressed that are currently playing a role in the current projects in the course of studies, so that it was a practical excursion. The discussion with company representatives was not neglected either, and future opportunities could be explored and contacts made.