Secretary of State Weigert tries out a virtual bicycle helmet 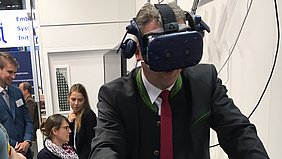 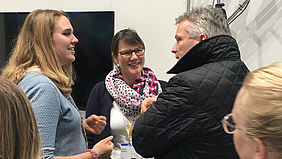 Technische Hochschule Ingolstadt (THI) was represented at Hannover Messe for the second time in succession. The university presented the knowledge transfer project “People on the Move” as well as the network projects “SAFIR” and “AWARE”.

Roland Weigert, Secretary of State at the Bavarian State Ministry for Economic Affairs, Regional Development and Energy, was also one of the visitors to the THI stand, where he tried out the virtual environment of the “Intelligent Bicycle Helmet”. The helmet aims to improve the safety of cyclists in the future and is currently being developed as part of the “Innovative Mobility” cluster of the “People on the Move” Innovation Alliance, a project being run jointly by THI and the Catholic University of Eichstätt-Ingolstadt (KU).

THI also presented the research and industry partnership SAFIR. In this network project, THI and partners from industry are conducting research into networked safety systems that will benefit all road users.

The internationally oriented Brazilian network AWARE was also presented: here the goal is to look at university activities from the perspective of a broader social relevance, thereby strengthening the so-called “third mission”, i.e. transfer to society.

All the projects presented pursue “Vision Zero” – the long-term goal of “zero road fatalities” – to which the CARISSMA research and test centre is contributing at the scientific level, SAFIR at the project level, and the “People on the Move” project at the social level.