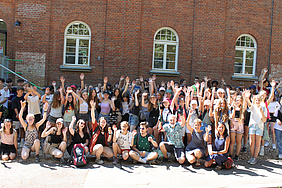 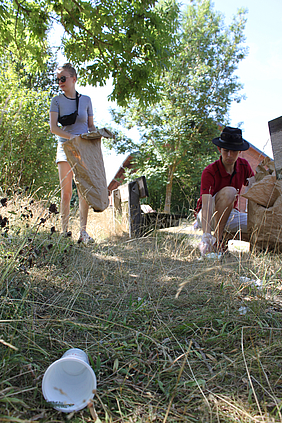 For the first time, there was a joint waste collection campaign by Neuburg schools and for the first time, the central point of contact was the Neuburg campus of THI. On Wednesday, 20 July, pupils from the Paul-Winter-Realschule, the Descartes-Gymnasium, the Maria Ward-Realschule, the Wirtschaftsschule as well as the FOSBOS Neuburg set out to clear the streets, paths and corridors in Neuburg's city centre and around the campus of rubbish. The pupils had started at their respective schools and - equipped with grabbers and rubbish bags - moved in a star shape towards the campus of the university.

The rubbish collection campaign is part of the cooperation between the TH Ingolstadt and the FOSBOS Neuburg. The focus is on sustainability. Anja Heßlinger, headmistress of the FOSBOS, got the majority of Neuburg's secondary schools on board to remove rubbish in the city area: "I am pleased that this is the first time there has been such a joint action, which proves that sustainability is an important concern for Neuburg's schools."

300 hard-working litter pickers were on the road

Prof. Dr. Holger Hoppe worked out the routes with his students, who all converged on the campus around noon. Over 270 girls and boys handed in the collected rubbish there together with their teachers and were rewarded with a cool drink and ice cream. The students of the Sustainability and Environmental Management course had also cleared the university grounds of litter that morning, so that a considerable mountain of rubbish was collected, which was then collected by the city and disposed of properly.

"Sustainability only works if everyone pitches in. The mountain of rubbish we collected shows that together we can make a big difference," says Dr Holger Hoppe, Professor of Sustainability and Environmental Management. And Anja Heßlinger adds: "This was a great action that raised awareness of the topic of environmental protection among the students. I would be happy if it didn't stay with this one-time action."