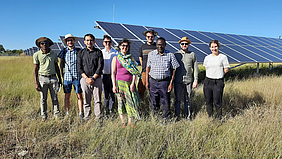 The PROCEED travel group at the mini-grid in Tsumkwe 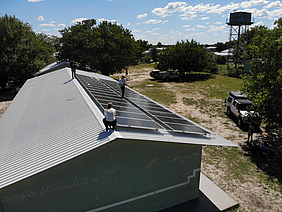 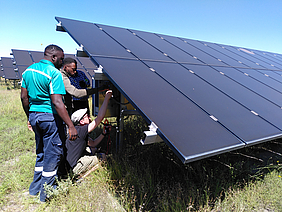 Technical analysis of the performance of the mini-grid in Gam

After more than two years of purely digital exchanges and extensive Zoom calls, the PROCEED team was finally able to meet in person in Namibia! From April 2nd to 15th, representatives from Technische Hochschule Ingolstadt (THI), University of Bayreuth (UBT), Hochschule Neu-Ulm (HNU) and IBC SOLAR AG were able to visit partners in Windhoek and travel to Tsumkwe and Gam – two of the project’s se-lected case study communities. PROCEED focuses on analysing existing solar energy-based mini-grid systems in Namibia regarding their socio-economic and technological conditions, aiming to formulate blueprint solutions for the successful implementation and maintenance of such systems in Namibia.

The trip started with a Stakeholder Meeting in Windhoek, at the Hanns-Seidel-Foundation’s House of Democracy. Representatives from politics, industry, academia and civil society came together to dis-cuss the project’s status quo and its potential future impact on the Namibian mini-grid sector. As PRO-CEED is a joint German-Namibian research project, the input of the local experts during the Stakeholder Meeting was highly appreciated.
Following the stay in Windhoek, the team, which now also encompassed representatives from the Na-mibia University of Science and Technology (NUST) and the Namibia Energy Institute (NEI), travelled north to Otjiwarongo, where they met with the local electricity provider CENORED and the engineering company DIS Engineering. Just one day later, they continued their trip further north-east, off the beat-en path, to reach the first community: Tsumkwe.
During the subsequent days the researchers dedicated themselves to gathering data on a variety of aspects: the maintenance and performance of the mini-grid systems in Tsumkwe and neighbouring Gam; the collection of data from previously installed smart metering devices; the interaction with the local communities to identify their needs and priorities when it comes to electricity consumption; and the analysis of appropriate tariff structures. They were continuously supported on-site by CENORED employees, who were very familiar with the two mini-grid systems and their individual challenges.
A special highlight for the team THI was the official hand-over of a 26 kWp PV-battery-system, installed on the roof of the Secondary School in Tsumkwe. This newly installed system shall serve as a decentral-ised extension of the undersized mini-grid. The THI researchers will closely examine the interaction of the new system with the main mini-grid and analyse how the extension both stabilises the electricity supply at the school and feeds into the mini-grid. The findings derived from this analysis could serve as a blueprint for future decentralised expansions of mini-grids – not only in Namibia, but the whole region.
Returning home after nearly two weeks of intensive exchange and data collection, the German re-searchers can now start evaluating and publishing the findings of this exciting research stay in Namibia.
The project PROCEED is funded by the German Federal Ministry of Education and Research (BMBF) and part of the CLIENT II initiative.