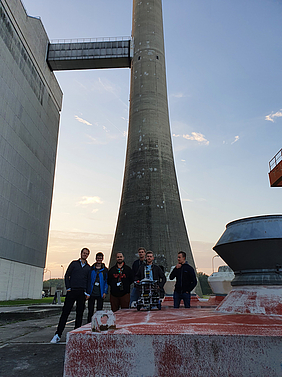 Every two years, the rescue and exploration robotics community meets at the Zwentendorf nuclear power plant (AKW) on the Danube just outside Vienna. This time, the roboTHIx team from Technischen Hochschule Ingolstadt (THI) is also on site and is testing how robots can support rescue forces in an emergency at the third European Robotics Hackathon EnRicH.

The task in the Hackathon's mock disaster is complex: the teams and their robots have to examine areas of the nuclear power plant for radiation and map important areas using laser scanners. If the radiation is too high, the autonomous or remote-controlled robots must then turn off valves. The way into the lower reactor area is made difficult by several stairs and door thresholds. Due to the radiation sources introduced, only radiation protection experts are allowed to be next to the robot platforms during the competition; the teams remain in a safe area and control the platforms remotely. If a robot breaks down due to a technical defect, it must be recovered under strict safety conditions.

The roboTHIx team led by Prof. Dr. Christian Pfitzner is taking part in EnRicH for the first time: students from the Faculty of Electrical Engineering and Information Technology have been assembling robot X1 over the past few months. It is equipped with two motors, a 3D camera, a laser scanner and a Geiger counter. On its mission, X1 creates a map of the power plant's surroundings within 30 minutes, in which the radiation sources are marked.

Besides the high levels of radiation that damage the electronics over time, there are other challenges: The thick walls prevent stable radio communication. This was also the fate of the robots in Fukushima, which penetrated the building with a cable. After a defect in the cable, the robots are still in the building today, ten years after the reactor disaster. So that the robots at EnRicH can still move around the power plant wirelessly, the organisers are providing a WLAN network.

"X1 is currently a first prototype; especially in comparison with the established teams that have been participating in EnRicH for several years.  Until shortly before a run, the robot platform is constantly being optimised and the software is also partly written on site. Nevertheless, many things are already working better than we had hoped and we can learn a lot from other teams," says Prof. Dr. Christian Pfitzner.