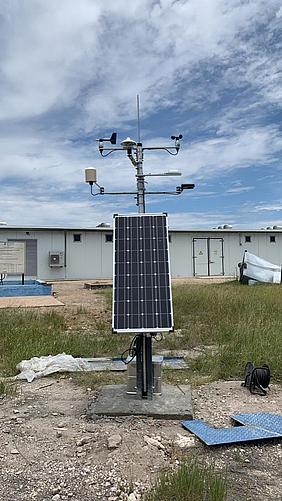 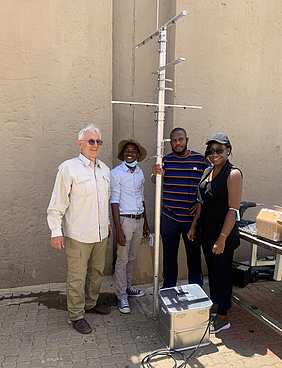 Initial set up of the weather station in Windhoek, with the support of students of the Namibia University of Science and Technology. 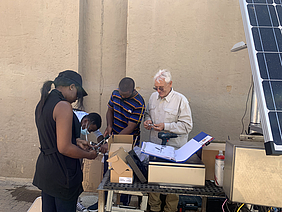 Initial set up of the weather station in Windhoek, with the support of students of the Namibia University of Science and Technology.

In cooperation with local partners, the Institute of new Energy Systems (InES) has set up a modern meteorological station in a remote off-grid community in Namibia.

The community of Tsumkwe in northeast Namibia, close to the border with Botswana, is one of three settlements being studied in the framework of the interdisciplinary research project PROCEED. With approximately 3,800 inhabitants, Tsumkwe is the largest off-grid settlement in Namibia that is not connected to the national electricity grid. The electricity is supplied, however, through an independent, off-grid energy system in Tsumkwe.
Until 2011, this so-called mini-grid was powered by two diesel generators, which could only be operated for 10 to 14 hours per day due to the high cost of diesel. In 2011, within the framework of the Tsumkwe Energy Project, a photovoltaic (PV) open space plant and a battery energy storage system were connected to the mini-grid. The resulting solar-diesel hybrid mini-grid provides 24-hour power supply, and has reduced diesel consumption at the same time. Consequently, both operating costs and CO2 emissions are saved.
A technical analysis and optimisation of the hybrid mini-grid in Tsumkwe is carried out within the PROCEED project. One important aspect of these investigations is to determine precisely the solar radiation and other meteorological conditions at the Tsumkwe site. For this purpose, a modern weather station from the company Adolf Thies GmbH & Co. KG was installed and put into operation on the mini-grid site.
In addition to the global radiation, the meteorological station also monitors the temperature, precipitation, relative humidity, wind speed and wind direction in direct vicinity of the PV field. The measurement data is stored on a data logger and also transmitted to InES via the Namibian mobile phone network. In the future, this data will also be made publicly available.
The collection and evaluation of weather data makes it possible, among other things, to compare the actual electricity yield of the PV power plant with the target yield that is expected under the given environmental conditions in Tsumkwe. This ratio of actual yield to target yield, also known as the performance ratio, is an indicator for the general condition and efficiency of the solar plant system. Also, the potential of a (more) regular cleaning of the PV modules can now be better demonstrated to the local mini-grid operator CENORED. Finally, the meteorological data obtained in Tsumkwe will be used for the dimensioning and simulation of off-grid power systems.
The weather station was procured by the InES and initially delivered to the local PROCEED partner Alensy Energy Solutions in Windhoek. Because the InES researchers were not able to travel to Namibia in person due to the COVID-19 pandemic, a local engineering service provider, Amusha Consultancy Services, was contracted to install the weather station. The station was first set up in Windhoek and configured for data transmission via the Namibian mobile network. Several students from the Namibia University of Science and Technology were also involved in this work. Through learning by doing, they gained practical experience and skills in setting up a modern instrument for environmental monitoring that complies with international standards. The students were also involved in the configuration and troubleshooting of the station. Therefore, the new weather station in Tsumkwe exemplifies two core targets of the PROCEED project: the transfer of technology and knowledge.
However, before the new monitoring station could finally start its service, it still had to survive unscathed the probably most difficult part of its journey to the other end of the world: a drive of about eight hours, partly on gravel roads, to its destination in Tsumkwe. The entire PROCEED team would like to thank CENORED, Amusha Consultancy Services, Alensy Energy Solutions, and Adolf Thies GmbH & Co. KG for their excellent support. Only through the ongoing dedication and commitment of our project and industry partners it was possible to successfully install our weather station, and start recording weather data in the remote community of Tsumkwe.
The project PROCEED is funded by the German Federal Ministry of Education and Research (BMBF) and part of the CLIENT II initiative.