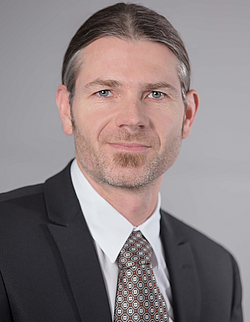 Riener’s focus in the field of hypothesis-driven, experimental research in the field of “Human Factors and Ergonomics” (human-machine interfaces or driver-vehicle interaction). The areas of interest include:

Since September 2015, Andreas Riener is a professor for Human-machine Interface and Virtual Reality at Technische Hochschule Ingolstadt (THI). He has a co-appointment with and is in the core development team of CARISSMA. Since March 2016, Prof. Riener heads the degree program User Experience Design (UXD, undergraduate) at THI and also heads the Usability testing/UXD and driving simulator labs. In March 2017, he was elected as the scientific head of the “Test Systems and Methods” division at CARISSMA. In October of the same year, he promoted to a research professor for “Human Factors and Driving Ergonomics” and founded the “Human-Computer Interaction Group” at THI.

Before he moved to Germany, Prof. Riener was a Priv.-Doz. at the University of Linz’s Institute of Pervasive Computing. He graduated in computer science at the Johannes Kepler University Linz in 2001. After spending a couple of years in industry in varying positions he joined again JKU in 2005, enrolled in the PhD program in computer science and worked as assistant at the Institute for Pervasive Computing, headed by Prof. Alois Ferscha. In February 2009 Andreas Riener completed his PhD studies and worked as a Postdoc until February 2014 at the same institute. In February 2014 he was awarded the venia docendi in “applied computer science” from the University of Linz and promoted to an associate professor position. The title of his habilitation thesis is “Perceptual computer science – Human-centric and reality-based human-machine interaction”.