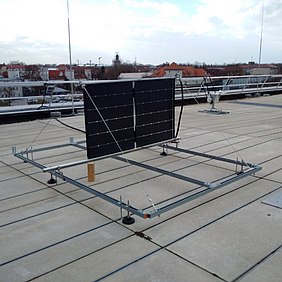 Nine students at Technische Hochschule Ingolstadt (THI) have constructed and tested a vertical agri-PV system in a pilot project - in cooperation with Schletter Solar from Kirchdorf and the energy providers E.ON Deutschland and LEW Lechwerke from Augsburg. Bifacial, i.e. two-sided, modules were used for the semester project. They can also convert sunlight that shines on the back of the module into electricity.

In a vertical Agri-PV system, these modules are mounted as a vertical wall that runs in a north-south direction. As a result, one side of the module faces east and generates electricity from early morning until late morning, while the back of the module contributes from early afternoon until evening. "In total, such a system can even produce more electricity than a usual south-facing ground-mounted photovoltaic system of the same output," says Sigrid del Rio, PV project manager at LEW Lechwerke, which has already been operating a test system of a similar design since last year. Thomas Pellkofer, Head of Solar Projects at E.ON Germany, adds: "Vertical agri-PV systems with a north-south orientation can be a useful addition to the power supply because they generate electricity mainly in the morning and evening, while classic south-facing solar systems reach their maximum yield at midday. Solar power produced in the mornings and evenings therefore also often meets higher demand on the electricity exchange."

This is also shown by the students' calculations, as Prof. Dr. Peter Weitz, supervisor of the students at theTHI, reports: "On an annual average, there is almost ten percent additional revenue for the electricity generated with this system at off-peak times. This additional revenue will even increase in the future due to the planned expansion of conventional PV systems and the associated greater supply of solar power in the middle of the day," Prof. Dr. Peter Weitz is certain.

Since the areas between the module rows can continue to be used for agricultural purposes - preferably for fodder meadows and pastures, as the students found out - such vertical agri-PV systems will receive EEG compensation on almost all agricultural land in Germany as a result of the 2022 EEG amendment. "The students' sophisticated design is slightly more expensive than a standard south-facing system, partly due to the high wind loads and more complex cabling," explains Dr Cedrik Zapfe, CTO at Schletter. In his opinion, the higher selling price of the electricity more than compensates for the additional costs, resulting in better economic efficiency. Schletter Solar will therefore offer the substructure for a vertical PV system on the market next year; demand is clearly increasing.

In addition to economic efficiency, the project also focused on the contribution to the energy transition. Prof. Dr. Peter Weitz shows the connection: "The solar power generation gap in the morning and evening from south-facing PV systems could be closed with electricity storage." It is much more sustainable to generate electricity directly with vertical agri-PV systems at this time; precious and expensive storage capacities are thus reserved for the night hours. A successful energy transition also requires aligning generation and consumption in terms of time. This means load shifting - like charging electric cars during the day - but also shifting the time of generation.