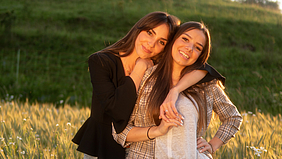 Tatjana Bittner, a student in the Bachelor's programme in International Management at Technische Hochschule Ingolstadt (THI), has created a platform for the mental strengthening of young people together with her sister Lorena. Under the name "JUST - Youth Strengthening", the two young women give teenagers tips on mental health as well as on self-confidence and personality development - topics that are often not explicitly taught at school, but which are of great concern to young people in their time of change. They use a website as well as an Instagram channel with videos, motivational speeches or podcasts, where they talk to experienced mental coaches and psychologists, but also to teenage role models such as influencers, actors or athletes, who talk about their challenges in life and how they have mastered them.

Personal contact with young people is also important to Tatjana Bittner and her sister. On a voluntary basis, they organize lectures at schools with professional speakers. Last year, they began with a series of lectures for parents and around 750 pupils in Neumarkt, for which they were able to enlist the services of former FIFA and Bundesliga referee Babak Rafati. The personal lectures are to be continued as soon as the situation around Corona allows it again. In the meantime, Tatjana Bittner and her sister want to reach as many young people as possible via digital channels.

However, the heart project of the two sisters has already received approval from outside. The young women are now supported by a health insurance company and the children's charity Children for a Better World e.V. The two sisters also scored points in the THI's ideas competition in the 2020 summer semester - their idea made it to first place.

The next step for Tatjana Bittner and her sister is to find sponsors to further support young people in their self-discovery with lectures and events.