Citizens can participate in the study 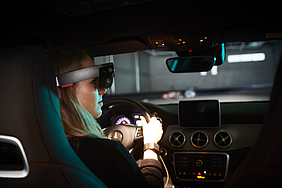 Excessive confidence in technology is thought to play a not inconsiderable role in fatal accidents involving automated vehicles. Researchers at THI under the direction of Prof. Andreas Riener aim to get to the bottom of this connection. Over the next three months, they will be interviewing citizens in a current online questionnaire about such issues as their level of trust in and personal expectations of future vehicles.

Trust in technology is regarded as one of the most important human factors in dealing with safety-critical systems, including automated driving. Since each driver is ultimately responsible for the safety of the vehicle, they must carefully monitor the system and correct it if necessary. This has little to do with conventional driving. The driver's tasks here are more similar to those performed by an aircraft pilot. In contrast to aircraft pilots, however, drivers often know very little about the technology used and its limitations, so there is a great danger of them being too quick to believe that such technology is infallible.

THI researchers now aim to carry out studies to see how great people's trust in technology actually is and what the key personality factors are that determine confidence in automated vehicles. The survey is being conducted not only in Europe but also in the United States and in China – both of which are major sales markets for the automotive industry.

The study is part of the research project SAFIR sponsored by the German Federal Ministry of Education and Research.

To participate in the study, see: www.thi.de/go/automation