National meeting of the ten BMBF funding agencies in Ingolstadt 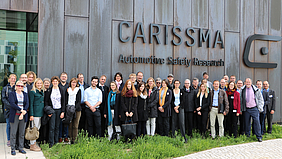 The participants of the second transfer workshop in front of the CARISSMA research and test centre at THI. Source: THI

Some 60 scientists and business experts gathered at THI for the second “FH Impuls” concomitant research transfer workshop organised by the Federal Ministry of Education and Research (BMBF). The aim of the event was to strengthen the strategic partnerships between the funded universities and their practical partners from industry and commerce.

With its funding programme “Starke Fachhochschulen – Impuls für die Region (FH-Impuls)” (Strong Universities of Applied Science – Stimulus for the Region), the BMBF provides targeted support for universities for applied sciences with strong research activities so that they can engage in close collaboration with SMEs in the region with respect to an existing research priority. With its research partnership SAFIR (“Safety for All – Innovative Research Partnership on Global Vehicle and Road Safety Systems”), THI is one of ten universities of applied sciences in Germany and the only one in Bavaria to be included in the 2017 funding programme. Over an initial period of four years, the BMBF is providing THI with funding of nearly EUR 6 million.

During the four-year development phase of the funding programme, several transfer workshops will take place in order to facilitate intense exchange on overarching issues. The event format aims to generate further knowledge on strategic research partnerships at universities of applied sciences and jointly secure results for use throughout the entire university system.

The transfer workshop at THI – the second of its kind after the 2017 kick-off event in Hamburg – focused among other things on the question of how cooperation with industrial partners within the framework of FH-Impuls can be strategically integrated into the research profile of the ten universities being funded. Another discussion topic was the importance of the long-term orientation of partnerships between universities, industry and regional authorities so as to generate synergies. Various external speakers contributed practical ideas in lectures and workshops. THI Professor Werner Huber described how it had already been possible to initiate new research projects from SAFIR.

THI President Prof. Walter Schober: “We are pleased that the BMBF has provided us with a strategically oriented funding instrument in the form of the FH-Impuls programme which we can use to cooperate with partners from the region over a much longer period than usual. The second FH-Impuls transfer workshop at THI offered a suitable platform to strengthen and intensify our partnerships”.

The SAFIR research partnership, which THI has established with more than 20 SMEs, automobile manufacturers and suppliers, local authorities and public bodies, is based at THI's CARISSMA research and test centre. THI and its partners are carrying out joint research into innovative technologies in vehicle and traffic safety – specifically in the following areas: simulation-based test systems for the pre-crash phase, test methods for global safety, global safety system and safe electric mobility. The aim is to ensure that the insights generated by SAFIR are directly applicable in the region.