A report by AWARE 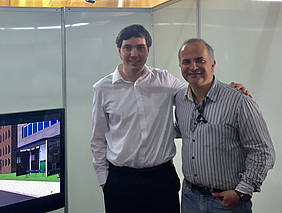 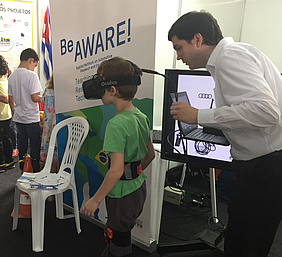 Testing the pedestrian simulator with a virtual reality headset at the SEPEX science week. Source: THI

The so-called third mission, i.e. socio-politically oriented university activities, is already able to look back over decades of tradition in Latin America. Third mission activities can be particularly effective if they respond specifically to the needs of society. In Brazil, this is particularly the case with road safety.

So it seemed only logical to invite THI to set up its own stand on this topic at the SEPEX (Semana de Ensino, Pesquisa e Extensão) science week organized by Brazilian university partner UFSC – the largest event of its kind in the southern Brazilian state of Santa Catarina. Here, Brazilian THI doctoral student Matheus Zimmermann (who is actively involved in the THI project SAFIR) demonstrated a pedestrian simulator with a virtual reality headset specially developed at the THI CARISSMA research facility which visitors were able to try out for themselves. The German-Brazilian research team at the CARISSMA research facility was also able to trace and compare behaviour patterns, which differed between German and Brazilian test persons.