1186 graduates were able to follow the celebration online. The traditional hat toss was also not to be missed. For the first time, a prize was awarded for a thesis related to sustainability. 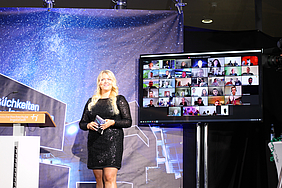 Nina Kummer (pictured) and her fellow student Quynh Ha charmingly led through the evening. The graduates were connected to the ceremony via livestream. (Photo: THI)

Technische Hochschule Ingolstadt (THI) said goodbye to the 1186 graduates of the winter semester 2020/21 and summer semester 2021 at its Academic Ceremony. As part of the hybrid ceremony, outstanding achievements were honoured on site in the new auditorium. Since a ceremony on a large scale is not possible due to the corona, the entire event was streamed so that students and their families could follow it online at home.

The organisers came up with something special to ensure that the celebrations could also take place at a distance. All 1186 graduates were sent a box containing an academic hat with a tassel in the respective colour of the faculty, a can of Prosecco, a confetti cannon, a pack of jelly bears and a high-quality THI notepad complete with pencil. So the traditional hat toss could also take place online.

Confetti and prosecco to celebrate with at home

Ingolstadt's mayor Dorothea Deneke-Stoll not only presented the awards on behalf of the city of Ingolstadt, but also addressed personal words to the students: "Tomorrow's cutting-edge technology is being developed at the THI. It is the most important pillar when it comes to the future viability of the region." With their degree from the THI, the graduates therefore had the best prerequisites.

The event was charmingly moderated by Nina Kummer and Quynh Ha, students of Business Scholl in the Business Administration degree programme.

Outstanding achievements of THI students were honoured at the ceremony. The award winners were introduced in short film sequences in which they presented themselves and the topic of their excellent final thesis before the laudators presented them with the award.

Honours and awards for special achievements

For the first time, a thesis related to sustainability was honoured. The first winner of the prize, sponsored by the Audi Foundation for the Environment, was Roman Schiebel from Köschingen. He modelled and simulated a plus-energy multi-family house and thus completed his Bachelor's degree in "Energy Systems and Renewable Energies". The prize was initiated by the "People on the Move" project. The aim is to promote students who contribute to the goals of sustainable development through their work or research and to motivate other students to address the topic of sustainable development in their work. The prize was awarded by the Managing Director of the Audi Foundation for the Environment, Dr. Rüdiger Recknagel.

Simon Nikolaus Müller achieved an outstanding Bachelor's degree (1.1) in his course of study "Energy Systems and Renewable Energies" with his thesis on "Method development for the early identification of decarbonisation potential at component level in vehicle development". The prize was awarded by Ingolstadt's mayor Dorothea Deneke-Stoll.

Lukas Benjamin Pichl was convincing in the Master's programme "Automated Driving and Vehicle Safety" (1.03) with his final thesis on "Model Based Measures and Transformer Networks for Evaluating the Similarity of Trajectories". Ingolstadt's mayor Dorothea Deneke-Stoll presented the prize.

Robert Reisinger delivered an outstanding thesis related to digitalisation in the computer science degree programme with a final grade of 1.0. The title of his thesis was "Conception, implementation and evaluation of an enterprise service bus-based integration architecture for the IT landscape of the city of Ingolstadt". The prize was also awarded by Mayor Dorothea Deneke-Stoll.

Amit Tulsidas Chaulwar completed his doctorate under Prof. Dr. Michael Botsch on the topic of "Hybrid Machine Learning Methods for Vehicle Safety Applications". He was honoured by Dorothea Deneke-Stoll for this outstanding doctorate.

Marina Eichinger dealt with "The Significance and Impact of Ethical Product Information in the Food and Clothing Sector" in her outstanding thesis with reference to internationality. She studied "Marketing, Sales and Media" at the Business School. The prize was presented by Prof. Dr. Andreas Manseck of the Lions Club Ingolstadt.

Simon Knollmeyer wrote the most outstanding final thesis related to entrepreneurship on the topic of "Conceptual design of a new product for decision support during forage harvesting" in the industrial engineering degree programme. The prize was awarded by Michael Gaßner, deputy board member of Sparkasse Ingolstadt-Eichstätt.

THI President Prof. Dr. Walter Schober awarded the "DAAD Prize" of the German Academic Exchange Service for an outstanding achievement by foreign students. He was awarded to Navneet Singh Dhir from the Master International Automotive Engineering programme, who has been a member of the Events and Excursions Department since the winter semester 2019/20 and Head of Events since the summer semester 2021 and is therefore responsible for organising excursions for incoming students. He fulfils representative tasks and is involved in all planning of the THI association N.I.C.E.. He is also a volunteer for the DAAD YouTube series "A day in the life of a student in Germany".

Yvonne Betz, Franziska Braun, Riccarda Lory and Markus Stegmayr were honoured for their outstanding student project. They all study International Trade Management and were honoured by the chairman of the association "Friends and Sponsors of THI", Prof. Dr. Hubert Waltl.

THI Professor Dr Thomas Brandmeier received the Rotary Research Award for his long-term research achievement (Safe Perception for an Integral Protection System for Automated Driving and Electromobility). The body sound airbag was developed in 2010 and went into series production. This was followed by a nomination for the German Science Award due to the airbag control technology for autonomous driving cars that takes into account ignition before impact, which is currently being developed at the partner Continental. In addition, Prof. Brandmeier and his team can boast a large number of publications and a high number of patent applications.

With personal words, the deans and institute directors bid farewell to the achievements of their graduates before the hats were traditionally thrown at the end.