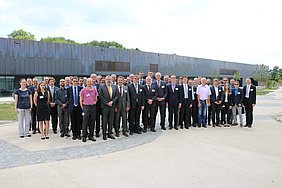 The research project SAFIR (“Safety for all – Innovative Research Partnership on Global Vehicle and Road Safety Systems”) has been officially launched at Technische Hochschule Ingolstadt (THI). The university management and participating professors presented the network project and its individual subprojects at a kick-off event. The 46 participants included a representative of VDI Technologiezentrum and the city of Ingolstadt as well as representatives of more than 20 industry partners (SMEs, automotive manufacturers and suppliers, public institutions). One focus of the event was on getting to know each other and promoting dialogue among guests.

The strategic partnership SAFIR is based at the THI research and test centre CARISSMA and deals with the topic complex of vehicle safety through a number of individual research projects, each of which is assigned to one of the following four research clusters: simulation-based test systems for the pre-crash phase, test methods for global safety, global safety system and safe electric mobility.

SAFIR is funded by the Federal Ministry of Education and Research (BMBF) under the programme "Strong Universities of Applied Sciences – Stimulus for the Region (FH-Impuls)", for which THI has applied for funding amounting to EUR 5.9 million. The total project volume, including the funds provided by industry, amounts to EUR 7.4 million. This award makes THI one of ten universities selected in Germany to have received funding for four years under the BMBF's most comprehensive funding programme to date for universities of applied sciences, which attracted more than 80 applicants.

Five SAFIR projects have already been launched, and further projects, for example with SME partners, are being successively applied for in order to further expand and strengthen the network. The aim is to ensure that the insights generated by SAFIR are directly applicable in the Ingolstadt region. The newly appointed SAFIR Scientific Advisory Board will meet for the first time in autumn 2017.