Two new professors started at the THI Institute AImotion Bavaria on 1 January. This means that the development of the AI mobility node is right on schedule. 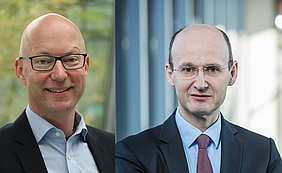 Only a good two years have passed since Bavaria's Minister-President Markus Söder presented the "High-Tech Agenda Bavaria" in October 2019. Technische Hochschule Ingolstadt (THI) was named a "mobility node" for artificial intelligence (AI) and has been growing even faster since then: the AI mobility node is to comprise 20 new professorships by the end of the year, 14 have already been filled. Since 1 January, Prof. Dr. Gerhard Elsbacher and Prof. Dr. Christian Seidel have also been among them as the first professors in the field of unmanned flight.

The THI is making rapid progress with the development of the AI mobility node. "The fact that we are able to attract the much sought-after AI experts so promptly shows how attractive the location is for research into AI mobility," says THI President Prof. Dr Walter Schober. The In-Institute AImotion Bavaria was founded at THI before the end of 2020 to bundle the university's AI competences. And with the associated institute AININ GmbH, the close networking with partners from science, business and society is to be realised. Ultimately, the region should benefit from what the scientists at the THI develop.

This is especially true for the automotive sector - but not only. Medical technology, sustainable urban development, artificial intelligence in retail or speech understanding also play an essential role - and of course urban air mobility. On 1 January, Prof. Dr. Christian Seidel took over the research professorship for "Intelligent Autonomous Flight Guidance". Previously, he worked for more than 15 years in leading positions at Airbus, most recently responsible for research and innovation projects in the field of autonomous helicopter flight. Seidel earned his doctorate at what is now the Karlsruhe Institute of Technology after studying at the Georg-August University in Göttingen and the Technical University of Munich.

Prof. Dr. Gerhard Elsbacher is the second new member of the team. His field of appointment is AI-supported aeronautical engineering and product development. He researches the systematic use of AI methods in aeronautical engineering and thus complements the research in the Unmanned Flight Cluster. The focus will be on "Machine Learning Control", i.e. the use of AI for the design and operation of control systems in unmanned and autonomous flight systems, as well as AI-supported product development. Prof. Dr. Elsbacher graduated in electrical engineering from the Technical University of Munich and then completed his doctorate at the Institute for Flexible Automation at the Vienna University of Technology. His professional path led him to MBDA (then EADS/LFK-Lenkflugkörpersysteme GmbH) as a developer in the aerospace industry, where he worked for many years as an executive in various positions, most recently as Operations Director and Member of the Board of MBDA Deutschland GmbH, responsible for development, production and quality management. In addition, he held overarching responsibility for the area of digitalisation, skills and improvement in the engineering department of the MBDA Group.

"We are pleased to have gained outstanding research colleagues in the field of unmanned flight for our AI mobility node," says Institute Director Prof. Dr. Michael Botsch. By the middle of the year, a total of almost 70 scientists will be working in the field of AI at the THI, compared to 26 so far. Dr. Christian Lösel, Managing Director AImotion Bavaria, is confident that this goal will be achieved: "We are already doing a lot of research work. Outstanding technological competence is being created here for the benefit of the region."

A second component of the "Hightech Agenda Bavaria" is a large-scale redevelopment and acceleration programme with an investment volume of 600 million euros. The programme also includes construction projects for scientific facilities. The THI is benefiting from this through the digital building, which is currently in the planning stage, as well as the modular building, which will be officially opened by Minister President Dr. Markus Söder at the end of January.

Other professors who began their service at the THI in January:

Dr Thomas Helmer is Professor of Integral Vehicle Safety and Automotive Engineering at the Faculty of Mechanical Engineering and previously held teaching positions at Technische Universität München and Nanyang Technological University in Singapore. Before his academic career, Prof. Helmer worked for BMW AG for ten years in various positions and functions focusing on vehicle safety and automated driving. His academic training took place at the Technical University of Munich and the Technical University of Berlin.

Dr. Simon Oberhauser is the new Professor of Materials Engineering and Manufacturing Technology at the Faculty of Mechanical Engineering. After studying mechanical engineering at the then FH-Ingolstadt, he completed his doctorate at the Institute of Materials Science at TU Bergakademie Freiberg as part of a cooperative doctoral programme. He then worked for more than 12 years as managing director at InnCoa GmbH, a company specialising in analysis and consulting on all aspects of materials, surfaces and corrosion. His research focuses on materials and surface technology, in particular diffusion layers and corrosion.