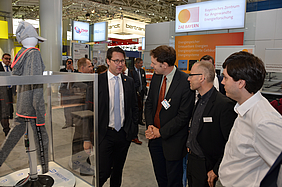 On 24 April, Federal Transport Minister Andreas Scheuer visited Bayern Innovativ's stand in the Research & Technology hall of Hannover Messe to find out more about SAFIR and the nomination of SAFIR partners THI and Continental AG for the 2018 Hermes Award.

The two SAFIR partners are working to develop a solution that enables vehicles to reliably and consistently detect hazardous situations at close range, react to them early on – for example by means of automatic evasive manoeuvres or early, controlled airbag deployment prior to a collision – and keep all potentially involved road users up to date on possible hazards. The scientists are paying particular attention to unprotected road users, as exemplified by the child pedestrian dummy which was presented to a broad trade fair audience for the first time.

The nomination certificate was presented by Federal Minister of Education and Research Anja Karliczek at a festive event on Monday.