In the past, there were many inventors who tried their hand at constructing a self-propelled object. But probably the first to succeed was Ferdinand Verbiest in 1675. Students at Technische Hochschule Ingolstadt (THI) painstakingly recreated the vehicle, proving that Verbiest's model actually drove. They found the description in a historical booklet from Dillingen. 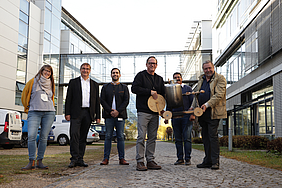 A true-to-scale replica of the first self-propelling vehicle has been developed by students and staff at Technische Hochschule Ingolstadt (from left) Kristina Heselhaus from the Pedagogical Centre, Prof. Dr Thomas Suchandt from THI, research assistant Christian Mayer, Uwe Golchert from the Montessori School, development engineer Mohamed Badran and Dr Gerd Treffer, who researched the history of the invention by the Jesuit Ferdinand Verbiest. (Photo: THI)

29 January 1886 is considered the birth of the automobile. On this day, Carl Benz received the patent for his vehicle with an internal combustion engine. An event that was to change the course of history. But Carl Benz was not really the first person to invent an automobile, i.e. a self-propelled object (from "autos" = self and "mobilis" = movable).

In 1870, for example, Siegfried Marcus had set a motor car in motion with a petrol engine, Isaac de Rivaz used a gas engine to power his car at the beginning of the 19th century and Nicolas Joseph Cugnot was a bit earlier still. He built a steam-powered carriage in 1769. The inventors were hardly mentioned in history. Just like Ferdinand Verbiest (1623-1688). The Belgian constructed a self-propelled device almost 350 years ago and is thus considered the actual inventor of the automobile.

You could not ride in the somewhat bizarre-looking vehicle. It was 60 centimetres long, 30 centimetres wide and had two axles with four wheels. A fifth wheel was used for steering, similar to a rudder on a ship. Transporting people and loads was not Ferdinand Verbiest's goal at all. The Jesuit priest was interested in proving that the principle of the "self-mover" worked with steam. In 1675, this was a sensation - even if it did not make it into the world public domain as such. The little vehicle was doing its rounds in Beijing at the time and was intended to impress the Chinese emperor. It was supposed to show what technical achievements the West was capable of, explains Dr Gerd Treffer.

The Jesuit priest was concerned with proving the "self-mover"

The Ingolstadt historian curated an exhibition on the cemetery of the Jesuit missionaries in Beijing. In the process, he came across Verbiest's grave and dealt with his biography. In the book "Astronomia Europaea", which was printed in Dillingen, Verbiest summarised all the scientific achievements of the Jesuits in China for his superiors. It contains a very accurate description of a small chariot. "In its centre I placed a basin full of glowing coals and above this container an aeolopile (= steam turbine); to the axle of the front wheels I connected a bronze cogwheel, the teeth of which, lying transversely and horizontally, engaged in another small wheel, which, attached to an axle - perpendicular to the horizon - acted in such a way that when the latter axle turned, the chariot moved," the Jesuit wrote. For to this axle he had added another wheel, which was fitted on the outside with small tubes in pairs. "Pressing on them, the wind emitted from a narrow nozzle of the aeolopile turned the whole wheel and at the same time drove the carriage, which travelled for an hour and more in a rather rapid manner."

There was no drawing or construction plan. But Treffer's interest was aroused. He wanted to know if this vehicle could really move. The proof was now provided by students at Technische Hochschule Ingolstadt (THI). Prof. Dr. Thomas Suchandt and his students used the descriptions from Verbiest's book to create the construction plans for the automobile. First they built the model from modern materials to check whether it would even drive. They looked for the right type of wood, experimented with the right pressure and the amount of water. Experimentation was the motto. "Some parts blew up in our faces," says the mechanical engineer, who is Vice President for Research and Transfer at the THI. The woodwork was made by pupils from the Montessori School in Ingolstadt. At the same time, the whole project was a journey into the history of technology, says Prof. Dr Thomas Suchandt: "We dealt with things that hadn't been used for centuries."

The object moves through water vapour

But it worked, the first outing was a success, and that was proof: the object can move itself with water vapour. A sensation, in Treffer's opinion, even if it will not change the historiography of the first automobile. "Recoil with the help of water vapour was already known to the ancient Egyptians," Suchandt reports. But this heat engine, called an aeolipile, was considered a curiosity at the time with no practical use. "The spectacular thing about Verbiest's development is that the object can move itself," says the professor.

Around 100 years after Verbiest, the physicist Johann Lorenz Böckmann had already built a replica of the vehicle, as Gerd Treffer researched: "He used it for demonstration purposes in his classes as a professor at the Lyceum in Karlsruhe. It was kept in the teaching collection, but then got lost, the historian says. An unknown draughtsman probably made a sketch of it. Gerd Treffer used it as a cover for his publication on the history of Verbiest and the vehicle.

The project was initiated and financed by the Audi Confucius Institute Ingolstadt (AKII), where Treffer is the head of historical projects. Now the students want to rebuild the vehicle with historical materials.