High-ranking guests came to the ceremony on Monday, including Federal Minister of the Interior Horst Seehofer 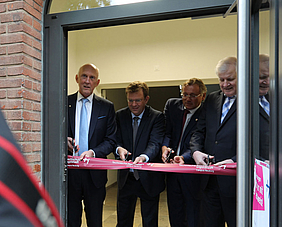 Ingolstadt, 6 October 2021 - 4 October is a historic date - both for Technische Hochschule Ingolstadt (THI) and for the town of Neuburg an der Donau. Because on Monday, the THI opened its external location in the Ottheinrichstadt. After many years of planning and preparation, the first students were welcomed to the new campus just in time for the start of the winter semester. Around 100 students have enrolled for the degree programmes "Sustainability and Environmental Management" and "Industrial Engineering and Construction", which are unique in Bavaria.

In the morning, the two course directors Prof. Dr. Holger Hoppe and Prof. Dr. Jana Bochert provided the young people from all over Germany with the most important information about their studies and gave them an insight into what they can expect in the coming semesters. High-ranking guests had announced their attendance - first and foremost Federal Minister of the Interior Horst Seehofer.

In the former drill hall on the grounds of the former Lassigny barracks, a new campus will be created in the coming years, a place to live and learn, a "science quarter with a showcase character", as Prof. Dr. Walter Schober, President of the THI, said in his welcoming speech. The renovation of the first building was completed just in time for the start of the semester. In the listed brick building, which now officially bears the name of the founder of the Neuburg Provincial Library, Max IV Josef, two lecture halls, two seminar rooms, a PC pool, a cafeteria and offices were set up. In the coming months, a modular building will follow as well as the gradual further expansion of the campus.

Horst Seehofer came to Neuburg on this day not so much in his function as Federal Minister of the Interior, but rather as a pioneer for the campus. After all, it was he who paved the way for the Neuburg campus a good five years ago - at that time still as Bavarian Minister President: "I still remember well how difficult it was to get there." But the point is to create something lasting. And where better to see that than in this building: "We shine here with buildings that our ancestors created." Educational institutions are the future of a country, the gateway to life for young people. That's why he had fought for the establishment of the Neuburg Campus: "The TH Ingolstadt has a brilliant reputation, nationally and internationally, and is experiencing healthy organic growth." The Neuburg campus is therefore in the best hands with the THI: "I am proud that such a successful university has been placed in my home region."

Due to a cabinet meeting scheduled at short notice, Minister of Science Bernd Sibler and Secretary of State for Economic Affairs Roland Weigert had to cancel their participation in the opening ceremony. However, Dr. Rolf-Dieter Jungk, Head of Office at the Ministry of Science, brought Minister Sibler's greetings and said, "With the green motto of the campus and its focus on the topics of sustainability and the environment, the THI has hit the bull's eye. The number of applicants shows that very clearly."

State Secretary Roland Weigert, as the then District Administrator of the Neuburg-Schrobenhausen district, played an active role in the creation of the campus. Even though he was unable to attend the opening in person, he let it be known: "It makes me proud that we are able to create a new university home for students here by joining forces, with many supporters. A vision is becoming reality."

This vision was developed in Neuburg more than ten years ago and Neuburg's Lord Mayor Bernhard Gmehling was also involved from the very beginning: "In my almost 20 years as Lord Mayor, I have been able to actively accompany many pleasing events," he said in his greeting. "However, the settlement of the Ingolstadt University of Applied Sciences campus undoubtedly represents one of the most significant projects." He thanked Prof. Dr. Walter Schober, who had put his heart and soul into it: "Without your powerful work, we would not be standing here today."

The Latin word campus means as much as seed field, said the District Administrator of Neuburg-Schrobenhausen, Peter von der Grün: "In Neuburg, the field of knowledge is being cultivated and I hope it will bring a rich harvest." The whole region will benefit from the university branch, the district administrator is sure.

Around 1,200 students in six Bachelor's and five Master's degree programmes will learn and research together on the campus. A sustainability research and transfer centre will also be established. More than 100 million euros have been earmarked for it, said Thomas Sendtner, head of the Ingolstadt State Building Authority.

Jasmin Parys is the first scholarship holder at the Neuburg campus. The Coburg resident was presented with the first university scholarship from the Neuburg Association for Education and Science by THI President Walter Schober and Neuburg Mayor Bernhard Gmehling. Jasmins Parys is studying sustainability and environmental management and will initially be supported for one year with 300 euros per month, half of which is financed by the association and the Federal Ministry of Education and Research.

After the ceremony, the building received the church's blessing from Dean Thomas Schwarz and Pastoralreferent Oswald Meyer from the university community. As a sign of sustainability, the speakers themselves lent a hand and planted a gingko, a climate tree. After the unveiling of the nameplate for the building, the guests were then able to see the premises for themselves.

In the morning, the THI had still offered a vaccination campaign at the campus in cooperation with the Schrobenhausen district hospital. The offer was open not only to staff and students, but also to the general public - and they were very active.