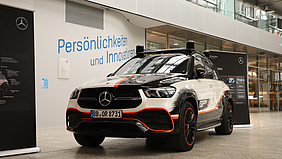 The Experimental Safety Vehicle from Mercedes in the auditorium of the THI (Source: THI)

On 6 October, experts from the German automotive industry and independent research institutes met at Technische Hochschule Ingolstadt (THI) to discuss the topic of vehicle safety. The meeting, which is held annually under the name "Berliner Erklärung zur Fahrzeugsicherheit", goes back to a declaration that was first drafted in 2011 in Berlin and has since been an initiative of the Association of German Engineers (VDI). This year the event was brought to Ingolstadt by THI and Prof. Dr.-Ing. Lothar Wech, spokesman of CARISSMA.
This year's event has a special significance. After all, 2020 marks the end of the previous road safety programme of the Federal Ministry of Transport (BMVI) and the start of the new programme for the decade from 2021 to 2030. In addition, the EU White Paper, the so-called "Vision Zero", stated that an interim assessment should be made in 2020 on the way to almost zero road deaths by 2050. Even if the trend is positive, the target of halving the number of road deaths in the EU by 2020 compared to 2010 will not be achieved.
Several presentations were given during the event at the THI. Prof. Dr. Walter Eichendorf of the German Road Safety Council (DVR) outlined in his keynote the challenges of future road safety work, with cycling and pedestrian traffic, electric light vehicles or automated driving playing central roles. Prof. Dr.-Ing. Rodolfo Schöneburg (Mercedes-Benz AG), spokesperson of the safety initiative, then analysed the measures taken to date in the field of vehicle safety and also gave an outlook for 2030 with concrete proposals for improving the situation. The aim for the next few years is to work closely with the DVR and the BMVI within the framework of the 'Berliner Erklärung' in order to further improve not only vehicle safety but also infrastructure and behaviour in road traffic.
The following keynote speeches dealt with current issues in road safety. According to Dr. med. Wolfram Hell (Forensic Medicine LMU) and Dr.-Ing. Matthias Kühn (GDV), the focus so far has been on reducing the number of fatalities, and in the coming decade the most seriously injured will also become the focus of prevention. Dipl.-Ing. Michael Fehring (Mercedes-Benz AG) showed how the introduction of new vehicles and safety systems affects road safety: While older passenger cars from before 2001 with lower safety potential are disproportionately involved in the number of car occupants killed, new passenger cars have a higher safety potential. Therefore, a rapid market penetration of today's safety systems must be the primary objective. In his presentation, Prof. Wech (THI) emphasised that the increase in e-vehicles in the next decade will indeed bring about changed dangers. However, the danger posed by the HV on-board power supply system can be reduced to a minimum by insulation, monitoring and shutdown devices. Other aspects such as low noise when starting up or the higher weight of electric vehicles must also be taken into account. It can therefore be assumed that road safety will not deteriorate as the number of electric vehicles increases.
After the presentations, all participants actively participated in a discussion round moderated by Prof. Dr. Steffen Müller (TU Berlin).
The reactions to the event were consistently positive among the participants:  The lectures were perceived as very informative and well-founded. And the community was expressly pleased to be able to meet and talk to each other again personally - at least in part - after a long period of corona. The event was attended by 38 people on site, and around 30 more participants were connected online.