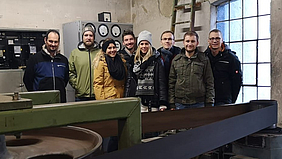 Students of  THI have investigated the potential of hydropower in the district of Pfaffenhofen and which additional alternatives to classical hydropower plants would be possible in the future.

According to calculations by the students, the potential of the existing hydroelectric power plants can be increased by up to 14 percent by 2030. Although this is hardly a significant increase in overall terms, it may well prove worthwhile for a single power plant: Efficiencies that are 5 to 11 percent higher would be possible by changing the turbines; with an automatic trash rack cleaning system, efficiency could be increased by up to 5 percent. Optimized operation would yield 3 to 10 percent. According to the students' findings, it would not be possible to build more hydroelectric power plants in the district of Pfaffenhofen beyond the existing 36, as this would take too much energy away from the respective river.

The students further investigated which additional alternatives to hydroelectric power plants would be conceivable in the future. They discovered new forms of energy production by hydropower, which are still under development but could play a role in the decentralised energy production of individual households in the future. The core idea behind these developments is the use of slow-flowing and shallow waters that are not suitable for conventional hydropower plants. Individual families living directly on such waters could thus be able to act as self-suppliers by means of small hydroelectric power plants and in combination with other renewable energies.

The students were supervised in their project by Prof. Dr. Daniel Navarro Gevers, Professor of Electrical Power Engineering in Renewable Energies. They were supported by the district of Pfaffenhofen, the Bavarian Fisheries Association and the Ingolstadt Water Authority.