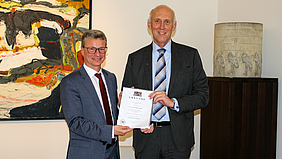 Prof. Dr. Walter Schober remains President of Technische Hochschule Ingolstadt (THI) for another four years. Yesterday in Munich, Science Minister Bernd Sibler handed him the certificate of appointment for his third term of office and congratulated him: "With Prof. Dr. Walter Schober, THI has a president who has known the university since its very beginning. Over the past eight years, he has dynamically and single-mindedly positioned THI for the future and increasingly focused on the topic of mobility. The successful development of the university is proof that his straightforward course is absolutely right: applied research and teaching offerings fit perfectly into the local corporate structure. His creative will and drive make him a recognized university manager at THI and a strong advocate of the universities for applied sciences throughout Bavaria. I am very much looking forward to further cooperation with Prof. Dr. Schober and wish him all the best for his third term of office".

Prof. Dr. Schober stated: "I am looking forward to the third term as President of THI. The political decision to further expand the university and to position it as an AI hub for digital mobility is a corresponding vote of confidence, for which I am grateful. The coming years will be challenging but also formative for the university due to the planned increase in student numbers, the large number of new courses of study, the construction of the Neuburg Campus and the further expansion of research. I am convinced that with the commitment and motivation of our employees and the support of our partners in politics and business we will be able to shape this challenge for the benefit of Ingolstadt and the region.

Since the beginning of its first term of office in March 2012, THI has developed into a sought-after contact point for students, an attractive partner for companies and national and international universities, which is clearly reflected in the figures: Around 6,000 students are currently enrolled at THI, and there are cooperations with around 250 companies and around 150 universities. Under Prof. Dr. Schober, the university has noticeably expanded its main topic, mobility, in recent years. Within the Bavaria-wide AI Network Bavaria, it represents a hub for research on digital mobility. Prof. Schober is driving forward the expansion of the university with great commitment - currently, among other things, on the external campus in Neuburg on the Danube.

Prof. Dr. Walter Schober studied business administration, economic and social education at the Ludwig-Maximilians-University of Munich. In various management positions at Motoren- und Turbinen Union München GmbH, he acquired comprehensive expertise in the field of mobility, with a focus on aviation. He has known the Ingolstadt University of Applied Sciences since its beginnings in 1994 as a founding professor of business administration, accounting and controlling. Before becoming president of THI for the first time eight years ago, he was founding dean of the Faculty of Economics and held the office of vice president as well as dean of the Faculty of Economics.

Hochschule Bayern e.V., the umbrella organisation of all state universities for applied sciences and technical universities as well as two ecclesiastical universities in the Free State, he will head the THI from 15 March 2020. He had already been deputy chairman since 2016.