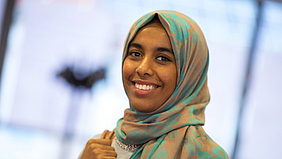 Jasmin Higo is a graduate of the Bachelor of Business Administration at THI Business School and has achieved something that only few succeed in doing: she was accepted for a Master's program at two universities of the so-called Ivy League. The Ivy League is an association of some of the oldest elite universities in the U.S., including Princeton, Harvard and Yale. Higo eventually decided to pursue a master's degree in public administration at Cornell University in upstate New York. She finances her studies with a scholarship from Cornell University, a Fulbright scholarship and a grant from the “Studienstiftung des Deutschen Volkes”.

Above all, her success should motivate other THI students to give it a try as well. "I wasn't sure at first whether I had a chance of being accepted at these top universities with my personal background," says Jasmin Higo. However, several professors at THI Business School supported her at the same time, for example with letters of recommendation for the universities or the scholarship providers. Her father, in particular, gave her the confidence she needed along the way.

Currently, Jasmin Higo works for Siemens AG, where she also completed her dual studies in cooperation with THI. After completing her master's degree, she wants to get work in the field of development aid.