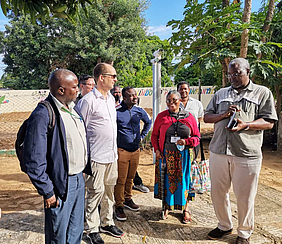 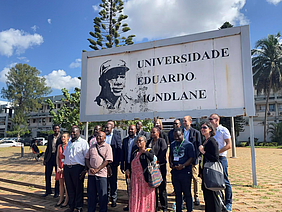 The first on-site SEED project meeting took place from May 16th until 20th in Maputo, Mozambique. During the week, representatives of the project partners from the Universität Bayreuth (UBT), Technical University of Kenya (TU-K) and the Institute of new Energy Systems (InES) met on the premises of the local partner university Universidade Eduaordo Mondlane (UEM). Other team members were joining digitally, including representatives of the industry partner Phaesun GmbH.

The focus of the week was the exchange with local stakeholders, including the national electricity provider Electricidade de Moçambique (EDM) and representatives from the Maputo city administration as well as the national agency Fundo de Energia (FUNAE), which focuses particularly on the electrification of the rural population. Involving the local institutions in the project is the basis for its success, as SEED is intended to optimally support and expand the existing energy infrastructure. Consequently, the aim is to develop a concept that supports decision-makers in the Global South in strengthening the resilience of cities.

To ensure that the innovative technological solution is oriented towards the needs of the population in Mozambique, the interdisciplinary SEED team visited several settlements in Maputo. The analysis of the local, socio-economic conditions is the basis for the subsequent concept development.

The energy concept developed in the SEED project is intended to improve the living conditions of residents of informal settlements in urban regions in the long-term. The aim is to provide renewable energy sources via a so-called Energy-Hub, which can be used by both households and businesses.  The local teams in Kenya and Mozambique conducted initial surveys to determine the type and quantity of energy desired by the potential users of such an energy hub. In Mozambique, for example, 387 households and 85 businesses were successfully questioned about their energy needs. This socio-economic and energy-related data is currently being analysed. The first results of the survey were discussed in plenary sessions with all project partners during the meeting in Mozambique, mainly to define the next steps in the SEED project.

In addition, the project meeting also served to get to know each other and exchange ideas, as this was the first face-to-face meeting with almost all partners.

The SEED project is funded by DLR with funding from the Federal Ministry of Education and Research (BMBF) and will run until the end of March 2024. For further, project-related information, please also feel free to visit our project website.