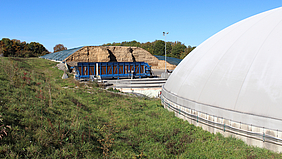 Within the scope of a project work at the Faculty of Mechanical Engineering, ten students of Technische Hochschule Ingolstadt (THI) from the study programmes Energy Systems and Renewable Energies, Mechanical Engineering and Industrial Engineering and Management dealt with the optimisation of a photovoltaic-biogas-hybrid plant. Through the detailed analysis of the system components and the evaluation of measurement data, various improvement potentials for the system in the Augsburg area were discovered and evaluated.

The general analysis showed, for example, that seven megawatts of the system's installed capacity is accounted for by the photovoltaic modules, which supply approximately six megawatt hours of electricity per year. These are supplemented by a CHP unit with a rated output of 760 kilowatts to provide a further six megawatt hours per year. By comparison, the total electricity requirement of the regionally closest towns of Egling an der Paar and Heinrichshofen will be 5.8 megawatt hours in 2018.

The work in sub-groups made it possible, among other things, to evaluate special optimisations for the photovoltaic system. In most cases, however, these are associated with increased expenditure because they involve retrofitting or conversion concepts. The costs for the measures evaluated ranged between 2.5 and 25 % of the acquisition costs of the plant. Comparatively simple potential for improvement lies in the use of waste heat from the inverters connected to the photovoltaic system. In addition, the installation of a complex mirror system to increase the performance of the photovoltaic modules was also considered.

With regard to the biogas plant, too, a wide range of optimisation options was examined, as many components interact there. The main focus was on the analysis of the agricultural and thermal processes at the plant and the optimisation of the plant's own energy requirements. Concrete potentials could be shown especially in the area of fermentation residue utilisation and waste heat utilisation for a local heating network and a drying plant.

In addition to the simple improvement of the individual plant components, various alternative operating modes for the photovoltaic-biogas hybrid plant system were also developed. The objectives of these operating options ranged from maximising the profit from electricity sales, through increased regional consumption of the energy obtained, to optimum waste heat utilisation through the expansion of a local heating network.

The project was accompanied by the lecturer Katharina Bär, PhD student at the Institute for New Energy Systems at THI.