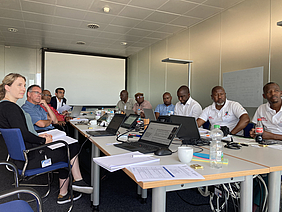 Project team during the workshop in Ingolstadt 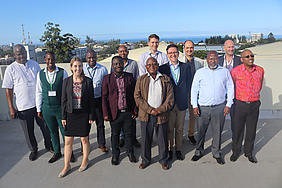 In the week from 18th to 22nd of July, the second of three workshops on the topic of rural energy supply through so-called island systems (“mini-grids”) in sub-Saharan Africa took place at the Institute of new Energy System (InES) in Ingolstadt. Energy experts from the partner universities Universidade Eduaordo Mondlane in Maputo/Mozambique, the National University of Lesotho in Roma/Lesotho and the University of Bayreuth exchanged on poten-tial solutions to technical and socio-economic challenges hindering the widespread use of mini-grids, with focus on Lesotho and Mozambique.

During the first workshop, which took place at the end of May 2022 in Mapu-to/Mozambique, the focus was on discussing solutions how to improve the regulatory conditions of rural electrification in Mozambique and Lesotho, which often inadvertently disad-vantage the rural population. The participants also exchanged on strengths and weaknesses of the respective national energy production systems and analysed ways through which Mozambique, as an example, can achieve the ambitious goal of complete electrification by 2030. The workshop was accompanied by experts from FUNAE (Fundo de Energia), a public institution in Mozambique that implements projects for rural electrification.

The aim of the three workshops is to develop new project ideas within the newly initiated international cooperation, through which a contribution can be made to solving the challeng-es of rural electrification, especially in Lesotho and Mozambique. The project ideas are ex-pected to have a sustainable impact by supporting national and regional development goals using solar energy resources, thereby improving access to electricity in rural sub-Saharan Africa.

During the workshop at InES, significant progress has already been made and an outline for a first project design has been developed. Through the technical and economic optimisation of existing mini-grids in Lesotho and Mozambique, potentials for sustainable and affordable energy supply in rural and sparsely populated areas in Mozambique and Lesotho will be analysed and exploited. The aim is to develop a model that makes the design of new mini-grid systems for sub-Saharan African countries sustainable and efficient, while also taking into account the needs of the local population.

The third and final workshop will take place at the University of Lesotho in early December 2022. The objective is to finalise our project idea and thus consolidate the initiated cooperation with our partners.

The workshops are funded by the German Research Foundation (DFG) with funding from the federal and state governments and aim to support the initiation of new international partnerships and research cooperation. For further project-related information, please also visit our website: Link