Marcus Wittrin, consultant at Unit 515: Research at Universities of Applied Sciences of the Federal Ministry of Research and Education (BMBF), visited us along with Dr. Siegfried Schubert and Egmont Fritz of the project management agency VDI Technologiezentrum in Ingolstadt so as to familiarise themselves with the SAFIR research partnership at first hand. 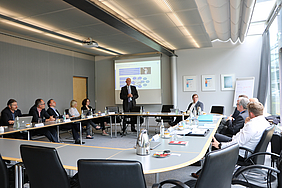 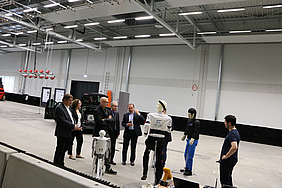 Deputy Director of CARISSMA Prof. Michael Botsch then gave the BMBF and the project management agency representatives a guided tour of the CARISSMA hall and several laboratories

In addition to THI President Prof. Walter Schober and Vice President Prof. Thomas Suchandt – spokesperson of the SAFIR partnership – the meeting was also attended by Vice Chancellor Kirsten Kohlmann and a representative of AUDI as well as SAFIR professors and research assistants.

In the course of an intensive dialogue session, the guests were able to gain a sound insight into the subjects, structures, visions and challenges facing the SAFIR team. The meeting concluded with a tour of CARISSMA given by Prof. Michael Botsch, Deputy Scientific Director of CARISSMA.