Even before the corona virus brought public life in Bavaria and Germany more and more to a standstill, the two THI employees Sonja Kupfer and Sabine Kapfhamer from the SAFIR management project had the opportunity to attend the 13th German Innovation Summit in Munich. A suitable platform to get inspiration and suggestions for their own innovation management in the context of SAFIR. 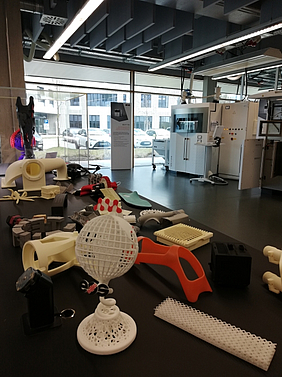 The InnovationLAB.tour led the participants to the EOS company in Krailing, the innovation leader in industrial 3D printing

The annual event has meanwhile developed into a "hub for cross-industry innovation", a cross-industry and cross-technology decision-makers' meeting in Germany. The congress impressively succeeds in bringing together people who want to change something with commitment, passion, curiosity, courage and foresight, who dare to do something new and who want to inspire, carry away and inspire others with their ideas, practical examples and business models: Digital pioneers, pioneers and decision-makers from renowned companies as well as young start-up representatives.

This year's congress was under the patronage of Roland Weigert, State Secretary in the Bavarian State Ministry of Economic Affairs, Regional Development and Energy, who introduced the guests to the congress days with a welcoming address.

Via an interlocking modular concept - consisting of keynotes, workshops, showcases or business speed dating, via CxO-Talk to an Innovation Walk in the Old Botanical Garden - the participants automatically got into conversation and exchanged contacts and ideas. Topics such as "Mobility 2030" and "Innovations between research and industry", "Innovation beyond hierarchies" and "What can the tech industry learn from football" were presented and discussed.

On the second day of the congress, there was the opportunity to take part in a so-called InnovationLAB.tour, where innovation centers, hubs and so-called accelerators of companies in and around Munich could be visited, and discussions with employees/decision-makers were possible. The first stop led the participants to the Plug and Play Tech Center in Munich, the world's largest innovation platform which successfully brings start-ups and large companies together through various approaches and programs. Further stations on the agenda were EOS in Krailing, the global technology and quality leader for high-end solutions in the field of additive manufacturing, as well as the factory district. The Werksviertel is an area near Munich's Ostbahnhof train station, where a new district is being created that aims to be a living, residential and working quarter in one, characterized by vision and innovation.

The German Innovation Summit is organized by the Hamburg-based Innovation Network. The format was presented for the first time 13 years ago and has been continuously developed ever since. Beyond the summit, the Innovation Network and the Cross Industry Makers Tank (CIMT) network people and technologies throughout the year.