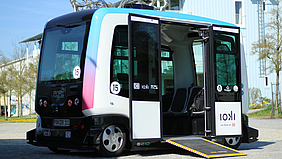 Autonomous minibuses will significantly change mobility in the future. The autonomous bus in Bad Birnbach has shown that it is already possible to put this technology to effective use in the context of current scheduled transportation services. It is highly accepted by all age groups as a supplement to local public transport and increases the latter’s positive perception. These are the core statements drawn from various studies on the use of the autonomous vehicle in the municipality of Lower Bavaria.

A research network in the field of innovative transport concepts consisting of DB Regio Bus, the University of Würzburg, Deggendorf Institute of Technology (THD) and several institutes at THI provided scientific support for the project, investigating transportation planning as well as social and technical aspects of autonomous bus transport. The insights gained allow important conclusions to be drawn concerning the transferability and further development of this issue in the field of public mobility.

“It was important for us not only to bring together as many different perspectives as possible on the subject of autonomous driving in public transport in this research project but also to share the findings with a broad public. In this way, we hope to make a contribution to the further development of mobility,” explains Thomas Huber, Head of Innovative Transport Concepts at DB Regio Bus in Bavaria.

Since the launch of the first autonomous bus line on public roads in Germany in October 2017, more than 20,000 kilometres have been covered and more than 32,000 passengers (as of October 2017) have used this form of transport (status: 31.05.2019). “We have jointly put the first autonomous vehicle in Germany on the road and integrated it in local public transport, and we are proud to see how well this scheme has been received in Bad Birnbach. The scientific results of this research cooperation will help us when tackling other more complex projects in the area of autonomous driving,” said Chris Büttner, Project Manager for Autonomous Driving with ioki at the presentation of the research results today in Ingolstadt.

Prof. Lothar Wech, coordinator of the various THI departments, looks back positively over the past months of cooperation: “We were able to contribute our expertise in the areas of user acceptance and technology and we are happy to have been involved in this special project together with the other partners”.

The results of THI's acceptance research show that the autonomous minibus is equally accepted by all sections of the population as a supplement to public transport. Neither older nor younger people have any reservations with regard to driverless transport

With regard to the transferability of the Bad Birnbach project to the further use of automated transportation, THD researchers established that there are a large number of potential locations throughout Bavaria, at least as far as the technical requirements are concerned. In addition, the commitment of the key protagonists involved is crucial in terms of actual deployment.

The research was conducted for more than a year and produced numerous other results. These can be viewed in the publication “Autonomous shuttle buses in public transport – analyses and evaluations of the Bad Birnbach case study from a technical, social and planning point of view”.

The next concrete step in Bad Birnbach is to connect the bus to the railway station in autumn 2019. Since the railway station is situated about two kilometres outside the town centre, the autonomous bus will fill an important gap in the market town's public transport system.