Its involvement in the research partnership SAFIR makes THI one of the ten universities funded under the BMBF FH-Impuls programme. It will be organising the 2nd so-called FH-Impuls transfer workshop in Ingolstadt. 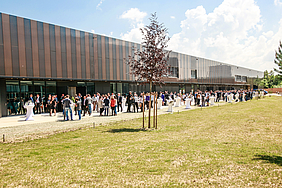 During a tour of the campus, the guests of the Transfer Workshop at THI also had the opportunity to get to know the CARISSMA research and test centre, which was opened in June 2016

The topic of the event in Ingolstadt will be: “Strategic partnerships with practical partners – involvement of industrial partners in the development and intensification phase”. THI welcomes representatives of the BMBF, the project management agency VDI TZ, the concomitant research team and the nine other funded universities of applied sciences from all over Germany. In addition, it was also possible to attract external speakers from other institutions to give lectures and workshops in which they share their practical experience. Participants can look forward to a fascinating programme of lectures and workshops, a demonstration in the CARISSMA hall, a guided tour of the city and a group dinner at Ingolstadt's oldest inn.
During the four-year build-up phase of the FH-Impuls funding programme, Stifterverband is organising several of these transfer workshops in cooperation with the host universities so as to facilitate intense dialogue between the universities on overarching issues. The event format aims to generate further knowledge on strategic partnerships in research at universities of applied sciences and jointly secure results for use throughout the entire university system. The 1st transfer workshop took place last June at Hamburg University of Applied Sciences.