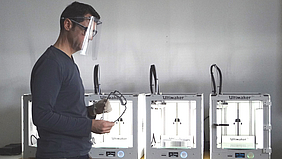 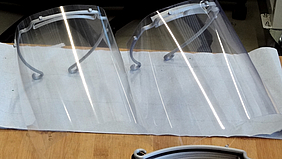 Ready-made protective visors, consisting of a bracket and a protective shield. Source: THI

The Ingolstadt Technical University (THI) supports hospitals and medical practices in the region by manufacturing protective visors for medical personnel. Professors and staff of the Faculty of Mechanical Engineering, who initiated the project and are accompanying its implementation, are thus helping those medical institutions whose own protective equipment is not sufficient for the treatment of corona patients.

Now that leading doctors in the region have examined the first prototypes of the protective shields and given the green light, the university is starting a more comprehensive provision. Currently, the university is able to produce 25 protective shields per day. With an already initiated expansion of the 3D printer capacities, this number can be increased to approximately 40 per day.

The protective visors each consist of a plastic hanger, which is produced using the 3D printers, and a transparent plastic film, which is pinned onto the hanger. The flexibility of the hanger allows the protective visors to be adapted to the shape of the head. The transparent plastic shield covers the entire face and can also be worn over protective masks and goggles. The protective visors, which are designed as a stopgap, can be used as an initial splash guard for larger droplets. The university is currently investigating the further optimisation of these visors as well as the production of other simple aids for health protection.